5 Ways To Get Better In Business With G Suite

5 Ways To Get Better In Business With G Suite

If you missed the big news, G Suite is the new name for Google Apps for Work. However, the change comes with more than a logo redesign and a new marketing campaign; it also comes with new and improved features to help you get things done faster.

We all know that some apps could use a bit of improvement to boost performance while using them. The best part is that Google also knows this and they are working at making your business life a little easier. Below we’ll discuss the 5 most important features that every business manager and modern employee should know.

Being part of an efficient team is a fantastic opportunity, but according to recent studies, even the most efficient team loses about 20% of their time in a week. Most of this time goes into finding who wrote what and when and in waiting for replies from colleagues.

For instance, let’s say you have a collaborative comment where the team introduced new ideas, comments, and made requests. This makes difficult to track who did what, but with Google’s natural language processing feature or NLP, you are reminded to assign a person to an action. If you write ‘Mike should cover this aspect’, apps like Docs, Sheets, or Slides will immediately search and find people named Mike in your agenda and suggest to assign the action to the right one (the action can also be done manually). This way everyone will know what happened there.

The assignee will receive an email and will see the action marked with blue in the doc when he or she will open it.

The feature described above allows each member of the team to know exactly what they have to do. Thus, when an employee opens Docs or Sheets, will see a badge on the files where they were assigned tasks. Also, other people can make suggestions to any of these documents and the person responsible for solving them will see a mark on the documents that need their attention. 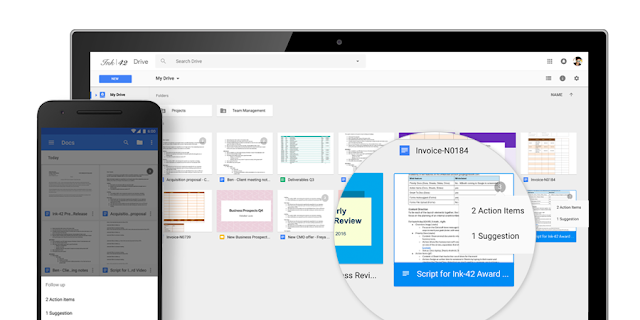 Forms is a feature launched in 2008 and it is extremely useful when you’re trying to get an answer to generic questions from a group of people. Since its launch, the database got bigger and now you have Smart Forms which can predict the type of options you need to a question. This means that you will spend less time thinking about making your questions easy to understand and answer. Actually, the time you spend creating a form has been reduced by 25% – pretty cool, right?

Another feature that makes Forms so great is the possibility to upload and share a document from your drive. However, this is only available for G Suite customers who use Forms in their organization.

#4: Speak to your documents

We live in a world where everything happens in the fast lane and having to type every idea or note, slows us down. That’s why Google introduced the Voice Typing feature in Google Docs which allows you to speak and the device will write your ideas and thoughts down.

The new element here is that your app will be able to recognize commands for formatting, content customization, or other actions like deleting text, inserting links, or adding comments. And everything will happen hands-free. Who said you can’t drive and work on your paper?

If you’re using Slack as a way to communicate with the team, then we have good news! Google just partnered up with them so, from now on, you can import, share, and create Google docs directly from Slack. This means faster communication and a better document organization as everything is attached to a discussion.

As you can see, the new features are built around performance and effectiveness so you won’t have to spend too much time doing repetitive, boring tasks. The uture is looking brighter for teams of all sizes and their managers!

Google Workspace Services: Should You Use It This 2022?

Google Workspace vs Microsoft 365 (2022): Which Is the Better Cloud Office System?

How to Set Up Data Loss Prevention in Google Workspace

How to Save Money by Using Google Groups Collaborative Inbox

Risks and Benefits of Two-Factor Authentication and Two-Step Verification

How to Reduce Your Google Workspace Costs

Is Moving to Google Chrome Environment the Next Step for Your Business?

How to Check if Your Password Has Been Leaked Online

How to Set Up Google Drive for Business

How to Use Google Workspace to Open Microsoft Office Files

Reduce IT Security exposure by using the most secure OS

Security Solutions to New Threats in Cyber IT Security

Why Should You Choose Chrome Hardware

What is White Glove IT Service?

Things to Check As Your Business Grows

How to Open Microsoft Office Files on Google Workspace

Adapting to a Flexible Workspace: Office and Remote Work

Onsite Helper services clients from a range of professions and we are experts at providing tailored integrated solutions that do not cost the Earth! We understand your business profession and from experience know what you’re generally looking for.

Ever Wondered How Your IT Universe Stacks Up? Drop Us A Line, And We’ll Help Paint You A Picture.

Fill out the form below so we can sit down and have a chat.